Get fresh music recommendations delivered to your inbox every Friday.
We've updated our Terms of Use. You can review the changes here.

The Devil Made Me Do It b​/​w Strut Your Stuff 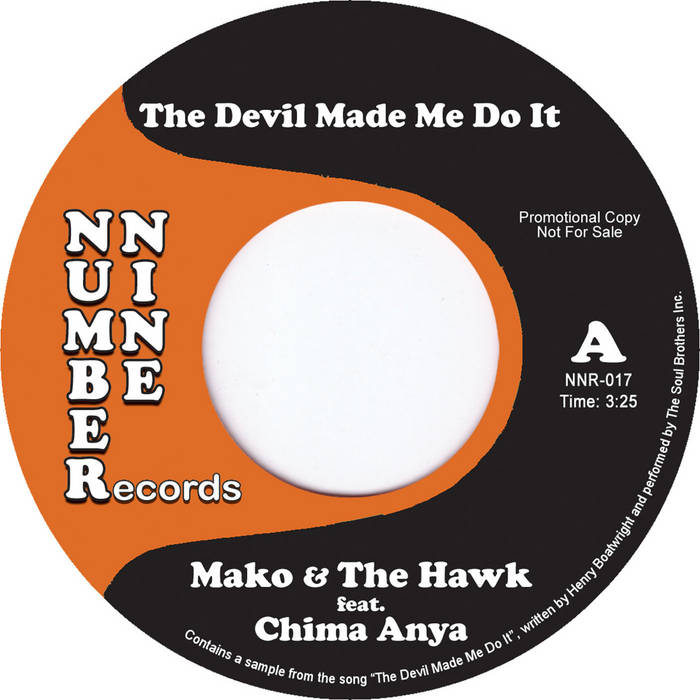 On their new 45, Mako & The Hawk take you back to a time when breaks were funky and rappers knew how to rhyme for a massive double dose of fresh original boom-bap. With beats forged from previously un-sampled (and legally cleared!) vintage funk breaks and emcee Chima 'The Doctor' Anya delivering lyrical wisdom, The Devil Made Me Do It and Strut Your Stuff are a pair of block-rocking jams to turn any party out!

Mako & The Hawk bio:
They might sound like a seventies cop show but Mako & The Hawk are always on the cut, producing and spinning floor-filling dirty funk and soul, old school hip-hop, reggae and party breaks.

Since forming in 2009, the pair have had vinyl and digital releases on Breakbeat Paradise, Freestyle Records, Funk Blasters and Tour of Booty, garnered frequent radio plays on Craig Charles' BBC Radio 6 Funk And Soul Show, supported the likes of JStar and The Bongolian and held down a never-less-than-packed seven year long residency at Mr Wolf's in central Bristol.

The Hawk is bassist for mod-funk legends and BBC Radio 2 darlings Big Boss Man, while Mako also produces as one half of Mako & Mr Bristow and is the long-running editor of music site monkeyboxing.com.

"I've got a real soft spot for what this pair get up to!" (Craig Charles, BBC Radio 6)

Chima Anya bio:
Chima Anya is an internationally renowned emcee who time and again has proven to be ahead of the curve while simultaneously staying true to the foundation. When not blessing mics worldwide, he moonlights as a medical Doctor in the depths of south London.

Tramp Records is one of Germany's tiniest but funkiest record labels. We release new bands, but also re-issue quality (not necessarily rare) funk, soul, jazz, folk and afro beat too.

If you like The Devil Made Me Do It b/w Strut Your Stuff, you may also like:

Bandcamp Daily  your guide to the world of Bandcamp

Alex Rita and Errol from Touching Bass feature in our special London edition of the Bandcamp Weekly.